Lacquer trees are getting ready for sprouting after these warm days. 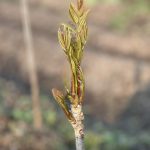 The lacquer field and mowing work have finally started.
Throughout the year I started growing lacquer trees, I noticed the cycle of the seasons.
In March, new spring, to plant lacquer trees.
In April, to sow vegetable seeds, prepare rice fields and then to mowing under lacquer trees, to take care of tea trees as well.
In May, to plant rice after tea picking.
Then, when the rainy season comes, to start tapping lacquer. (Even though I can tap from my trees by myself about 10 years later.)
In summer, middle of August, to sow buckwheat seeds in the other fields.
In October, finishing tapping lacquer through the whole summer, to harvest rice.
In November, to plant wheat after harvesting buckwheat.
Then just wait for snow.
I could realized such a cycle of a year.

During 10 years until I can tap laquer from my trees,
To grow lacquer trees from seeds.
When lacquer trees began to bloom, I collect the honey from the lacquer flowers.
Then, to pick lacquer nuts, make wax, drink lacquer tea.
And then, to dye clothes with lacquer from trees after tapping lacquer.
Now that I can imagine such a long cycle. 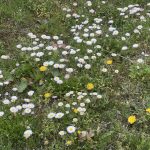 I realized that the life speed stands to reason through the natural life, growing lacquer, growing children and growing rice and vegetables with natural cycle. Even though it is not the same speed as economic one.

In this year cycle from now, I am thinking of tring to find another nice plant growing with lacquer besides tea trees. 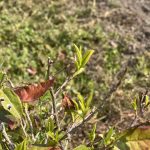